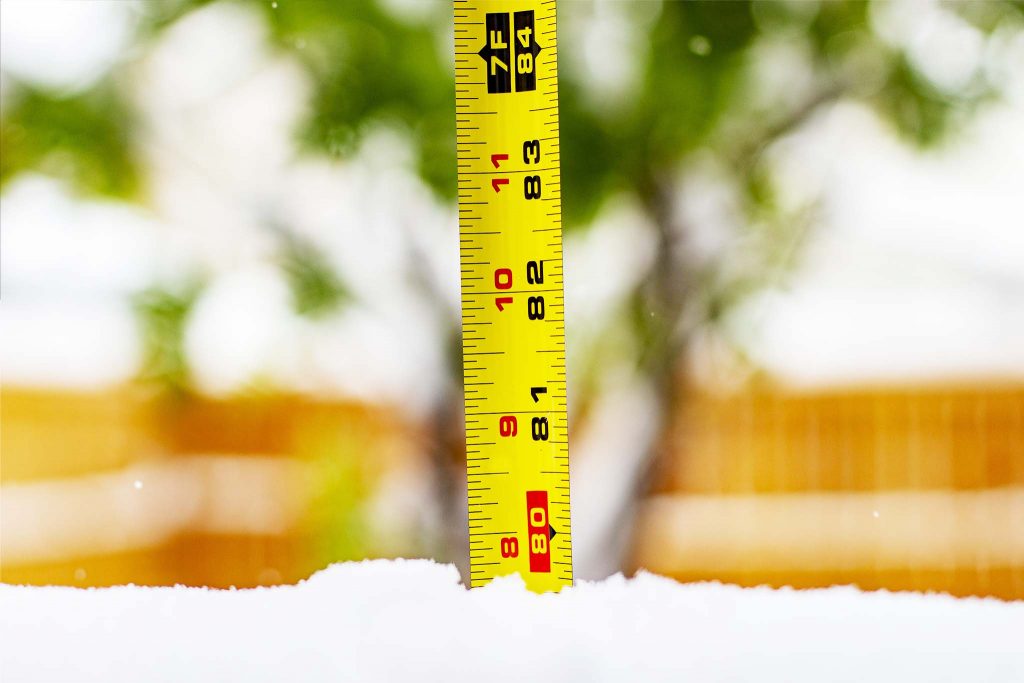 It’s imperative that building owners and builders are wary of excessive snow on metal roofs during winter months, especially in snow and ice-prone areas like here in New England. Staying educated on the building’s snow limit and taking action to remove the snow will help prevent damage to the metal building’s structure and safeguard the investment.

Seasonal snowstorms with heavy snow can create packed layers of snow and ice. Just a few feet of depth may weigh 50 psf (pounds per square feet). Snow drifts can increase loads and provide risk of building damage or collapsing. Various snow types (light, fluffy or heavy, wet) from different geographic areas need to be considered. For example, snow in the western United States is typically lighter and less dense than snow that falls on the East Coast, which is usually heavier and wet.

Snow on Pitched or Flat Roofs

Flatter roofs are most vulnerable to packed snow that causes heavier roof loads. Snow can accumulate when blowing from a taller building and may drift to a shorter building. Drift loads also take place between close buildings, ridges, in valleys, behind parapets, near rooftop units and on eave canopies or overhangs. A building with a high-pitched roof is preferable and easier to clear ice and snow.

Environmental aspects may change the original building’s construct and can affect drifting. Perhaps trees have grown-in over the years and affect where wind-blown snow accumulates. Changing the building’s structure post-construction can also cause concern affecting the amount of snow load capacity.

What is snow load?

When snow and ice accumulate, the downward force that weight creates on the building’s roof is the snow load. If built in a snow/ice-prone area, even well-designed and constructed buildings in good condition can fail if the snow load exceeds the weight it was designed to manage.

How to calculate snow load:

Multiply the depth of snow in feet by the weight of a cubic foot of snow. For example, the snow weighs 10 pounds per cub foot and there are 1.5 feet on the roof, each square foot of the roof is getting approximately 15 pounds of pressure.

How to remove snow and ice from metal roofs:

Talk to a Package Steel consultant about getting your metal building project off the ground.

Do you intend to have a full foundation for your building?

All Package Steel buildings require a full and properly designed foundation including flooring, piers, and perimeter frost walls. This work should be completed prior to the arrival of the building on-site. Every foundation is site-specific and should be designed by a local engineer who will consider soil conditions, frost depths and any local regulations which may affect it.

If you do not already have an engineer to design the foundation, Package Steel can provide assistance with locating an independent licensed engineer who can help you through this portion of the project.

Do you have a building permit from your local city/town?

Before any construction can begin, you must secure the required building permits from the city or town in which your site is located. This allows the local government to ensure your project and the resulting structure will be safe and meet all zoning, size and other requirements. The process involves submitting an extensive application along with a certified site plan, property deed and scheduling of all necessary inspections. Specific requirements vary among municipalities, as does the time it takes to get your building permits. An experienced builder can help you meet all these regulations and secure approval.

Are you okay with a 6 month lead time?

Metal buildings generally take less time to construct than wood or concrete buildings, but the exact timeline varies widely. We recommend allowing at least 6 months for the process, which includes matching you with a local builder, developing a scope of work and design proposal, fabricating the building components and delivering your structure to the site. The actual time from start to finish is determined by a variety of factors, including the size of the building, the complexity of the design, availability of materials and uncontrollable variables such as the weather.

Have you contracted a builder?

Some business owners with construction experience choose to build or to coordinate the building of their own structures independently, often with prefabricated metal building kits. This do-it-yourself approach can work for smaller structures, but for medium- to large-sized buildings, it’s best to enlist the services of a high-quality builder. An experienced builder, paired with the right metal building manufacturer, can help guide you through the entire process, from ensuring that your site and structure conform to all local building codes to construction to final approval for occupancy.

Do you intend to have a full foundation?

The standard Lorem Ipsum passage, used since the 1500s5

"But I must explain to you how all this mistaken idea of denouncing pleasure and praising pain was born and I will give you a complete account of the system, and expound the actual teachings of the great explorer of the truth, the master-builder of human happiness. No one rejects, dislikes, or avoids pleasure itself, because it is pleasure, but because those who do not know how to pursue pleasure rationally encounter consequences that are extremely painful. Nor again is there anyone who loves or pursues or desires to obtain pain of itself, because it is pain, but because occasionally circumstances occur in which toil and pain can procure him some great pleasure. To take a trivial example, which of us ever undertakes